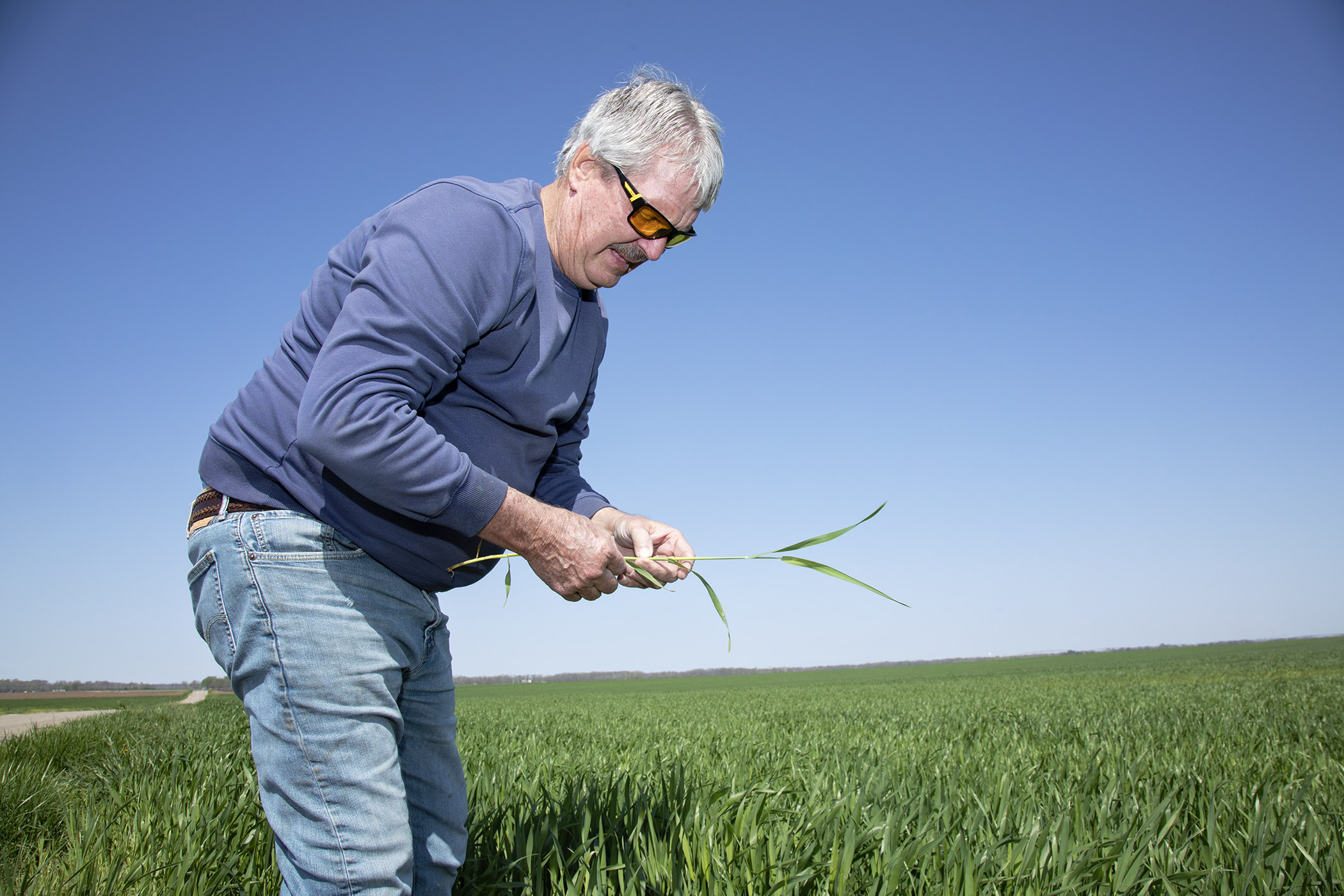 Brad Daugherty has been driving a tractor over the same land in Clark County since he was 6 years old.

The new Illinois Farm Bureau director for District 13, covering Coles, Clark, Crawford, Cumberland, Jasper, Lawrence and Richland counties, grew up on a corn, soybean and wheat farm in West Union, and has since expanded the operation to double crop beans, seed corn and green bean production with help from his two sons, Brandon and Aaron, as well as his wife, Debbie.

Since they could walk, Daugherty and his five siblings helped his late father, Dennis, on the family farm.

“I can remember that as a kid, I’d stand on the drawbar, which you shouldn’t do now, but back then it was just part of (farming). My dad would lift the planter up and had me look to make sure the seed was dropping,” Daugherty remembered.

When he went off to junior college at Lincoln Trail College and eventually the University of Illinois, Dennis left it up to his son whether he wanted to come back to the family farm.

“When I got ready for college he just said this farm is here if you want it, but do what you want,” Daugherty recalled. “Maybe because he didn’t have this chance to go to college. But he made sure each and every one of us had that opportunity to go to college.”

Daugherty graduated in 1974 from U of I, where he majored in ag economics and minored in farm management. Both of Daugherty’s sons also graduated from his alma mater.

An avid basketball player through high school and junior college, Daugherty has since left most sports behind. “My knees can’t handle that,” he explained.

But during an annual trip to Mexico about 10 years ago, he found the perfect activity that wasn’t so hard on his joints — scuba diving. Every winter, he and Debbie travel to their timeshare in Mexico, where on a whim, he decided to get certified.

“I like to just go every time I get a chance,” Daugherty said. “Normally at about 45 to 50 feet you’ll see shipwrecks. I have not seen any sharks that amount to anything, just some barracudas, but they’ll swim away from you,” he said.

Daugherty, who replaced retired IFB Director Dennis Green on the board, has been a Clark County Farm Bureau member for 40-plus years and has served as its president for 22 of those years. He’s also the Illinois Soybean Association’s (ISA) Government Relations Committee chairman.

He’s also past president of the Hutsonville School Board, and has volunteered in leadership roles for the Clark County Farm Bureau and other organizations. He was honored as a Master Farmer in 2003, and is an Agriculture Leaders of Tomorrow graduate.

Working with legislators has been a highlight of Daugherty’s tenure with Farm Bureau and ISA.

He specifically pointed to the B20 bill that was recently signed into law by Gov. J.B. Pritzker and incentivizes increasing blends of biodiesel.

“(State Rep.) Eva-Dina Delgado (D-Chicago) was the one who carried it for us in the House, and (State Rep.) Lisa Hernandez, who is our adopted legislator ... they pushed hard to get that through the House, and I was able to work with them,” Daugherty said.

The benefits of being a Farm Bureau member are numerous, but Daugherty said the behind-the-scenes work isn’t always obvious.

“We really don’t toot our own horn,” he said. “I think more than anything else is Farm Bureau’s commitment to the farming community and how they’re going to stand behind them.”